During the week of July 4, we travelled to Ohio and stayed in Youngstown.  During the day, we travelled to southern Lake Erie around the Sandusky area and saw 3 of the Lake Erie Lighthouses, South Bass Island, Marblehead, and Fairport Harbor. South Bass Island could only be reached by ferry across Put-In-Bay. You can take the ferry ride with us on the Miller Ferry at Ferry Ride Across Put-In-Bay. The South Bass Harbor lighthouse can be seen on the point of the island to the left as we approach. We did take some pictures of the lighthouse, but it wasn’t open for tours on the day that we were there.

One of the most interesting lighthouses that we saw, however, was the Fairport Harbor Lighthouse Museum. This lighthouse, pictured below, is the most like I would picture a real-life Foggy Point Light. While the lighthouse tower used to be attached to the house, it actually sits beside it right outside the door to the museum today. I climbed up the spiral staircase to the top and captured the view shown beside the lighthouse. 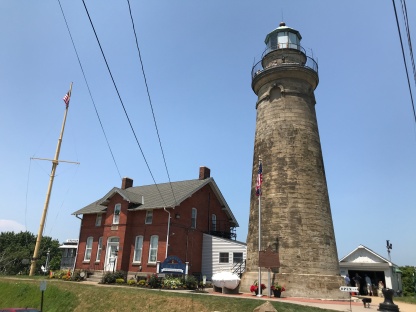 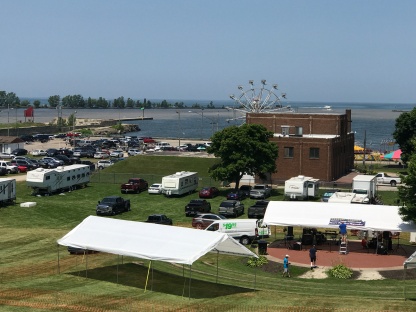 My name is Jeff Burns, and I'm the author of the Foggy Point Light Trilogy. I grew up in Easley, South Carolina and later attended Furman University in Greenville. My major was in computer science, which has served to allow me the ability to create the website for Foggy Point Light Publishing LLC. Growing up, my family and I took many trips down to the North Carolina and South Carolina coast where I was able to climb to the top of several of the lighthouses there and experience the view from the top. Cape Hatteras is one of my favorites and I was able to climb to the top both before and after they moved it to it's new location. Since I also enjoy reading science fiction and mysteries, I decided to combine both of these aspects using a lighthouse setting for the creation of the Foggy Point Light Trilogy. I currently reside in Charlotte, NC with my wife and son where I enjoy collecting miniature lighthouses as well as being an active amateur radio operator.. View all posts by Foggy Point Light

The second book in the Foggy Point Light Trilogy, "Ripples: Return to Foggy Point LIght" is available now for Apple Books and Barnes and Noble Nook as well as Amazon Kindle.

Continue the adventure with Dan Nelson and his family as they meet new friends and continue the journey to unlock the secrets of Green Island and Foggy Point Light.